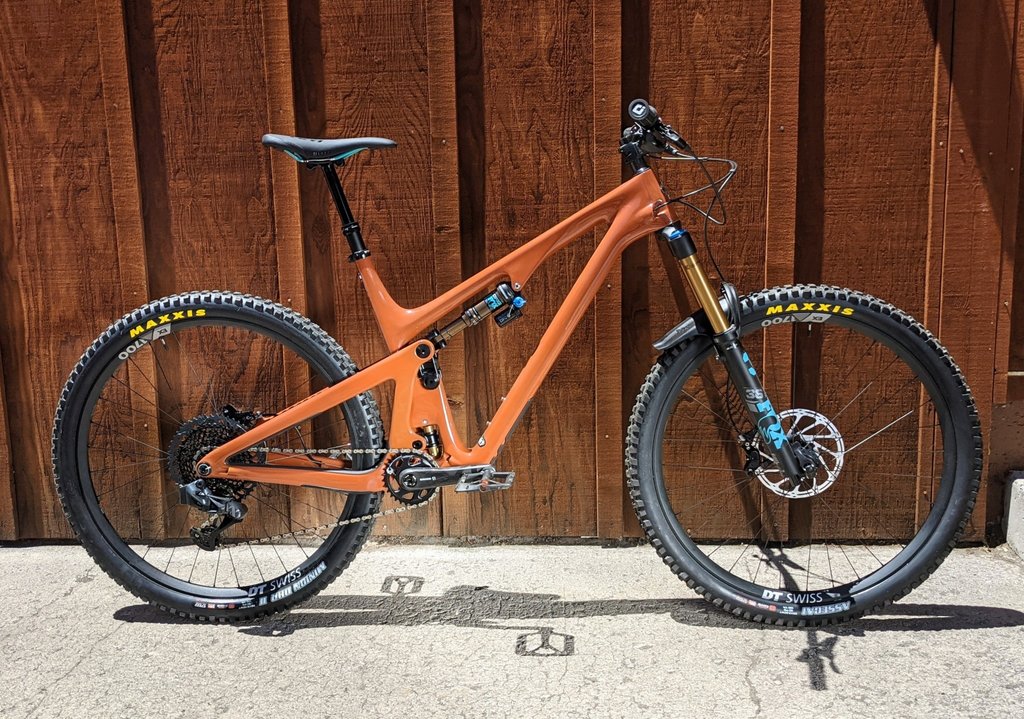 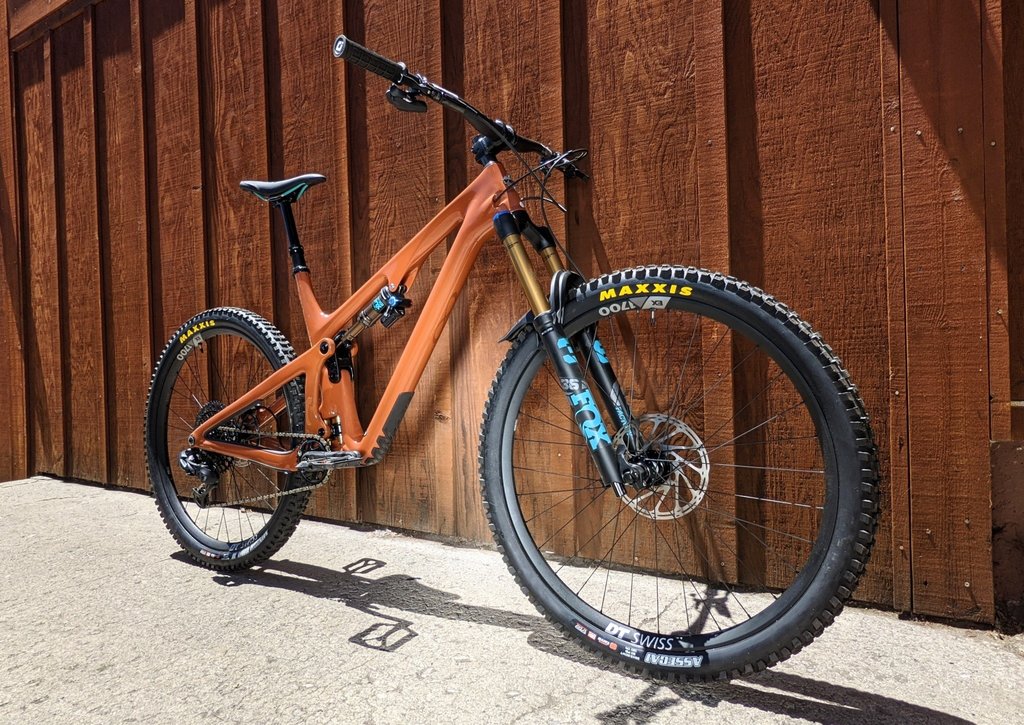 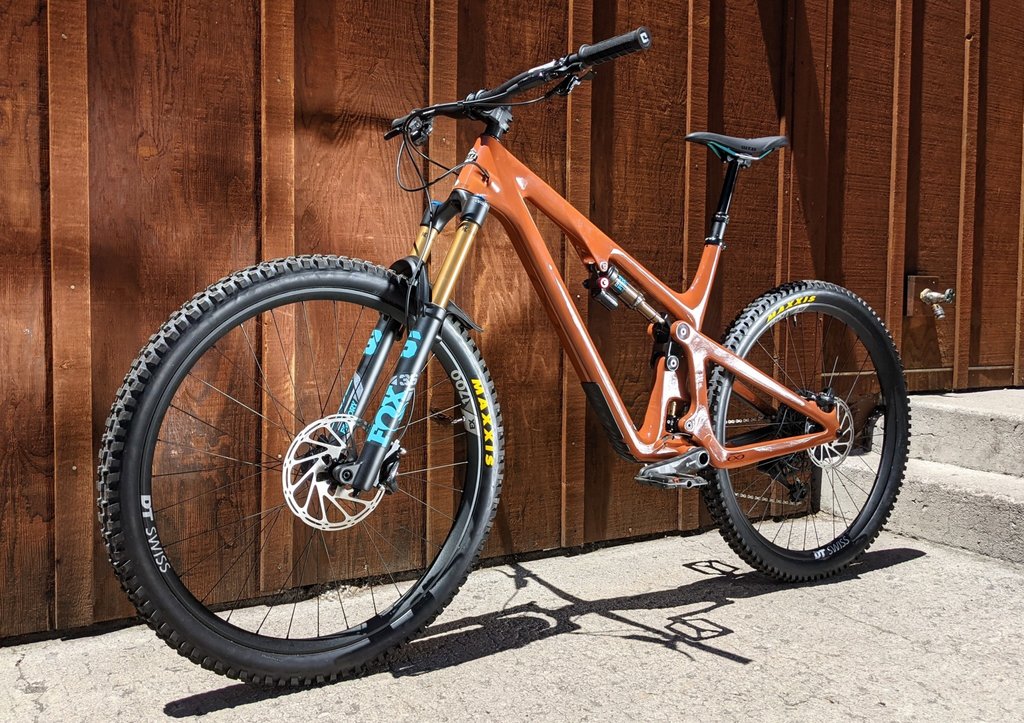 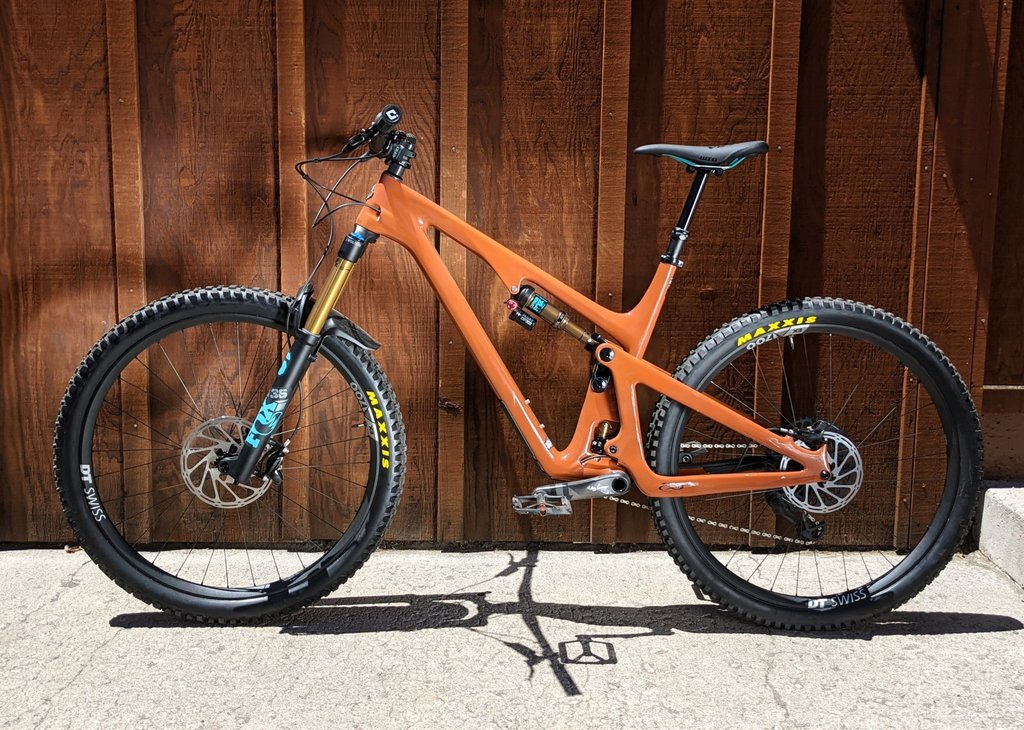 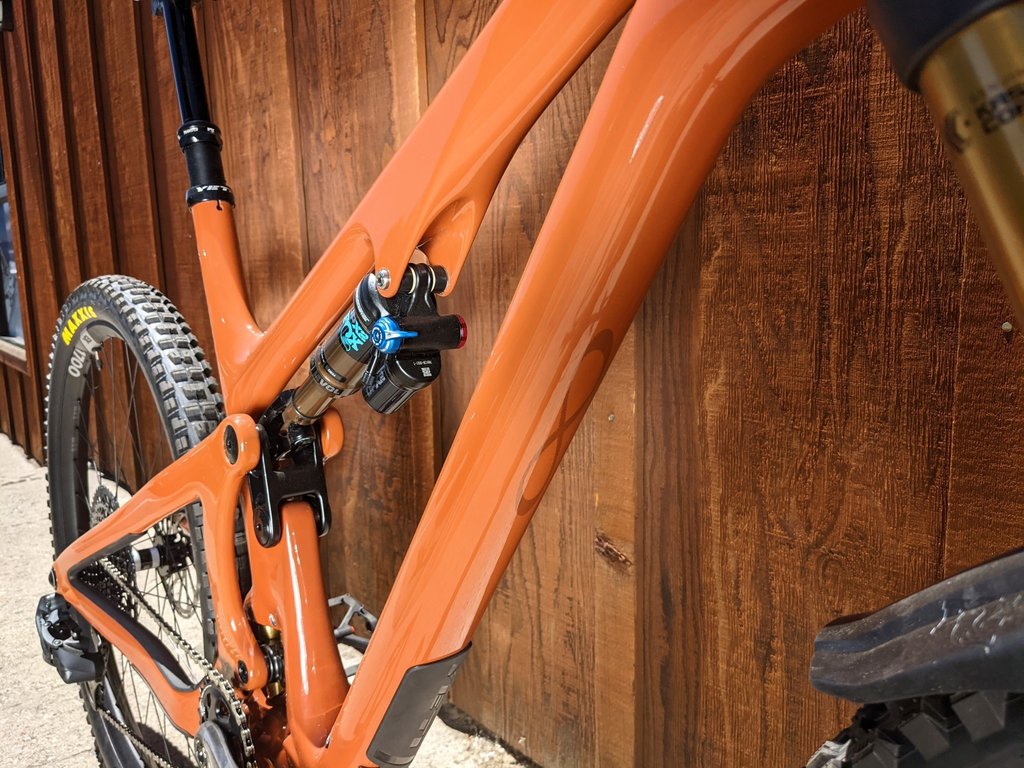 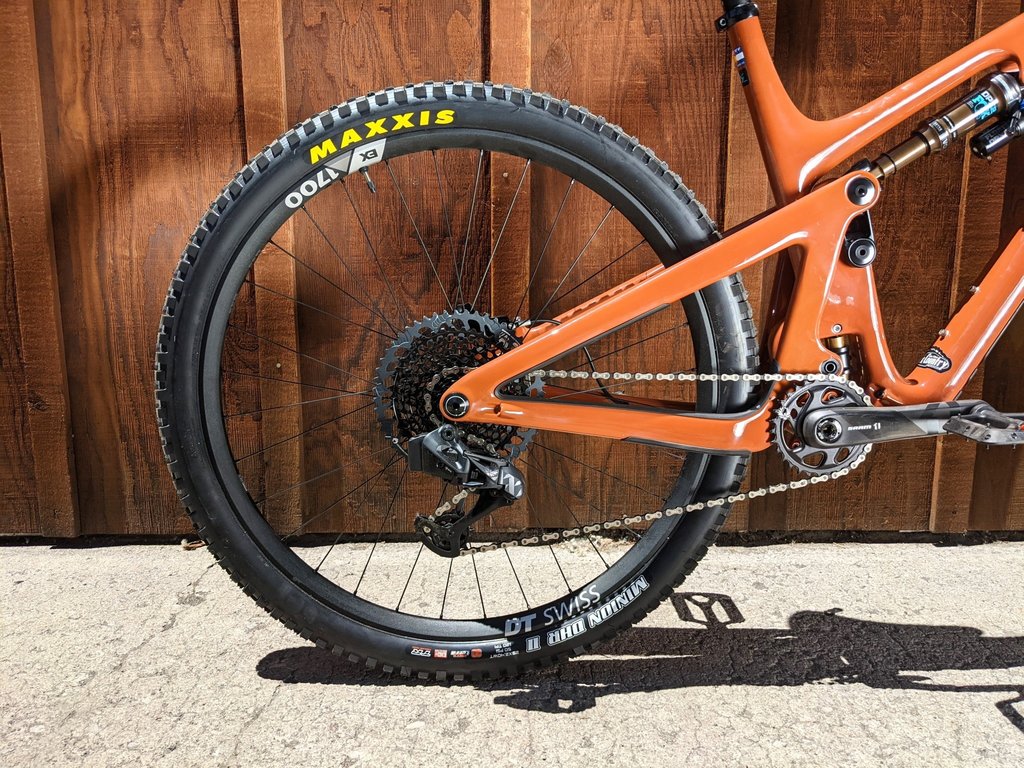 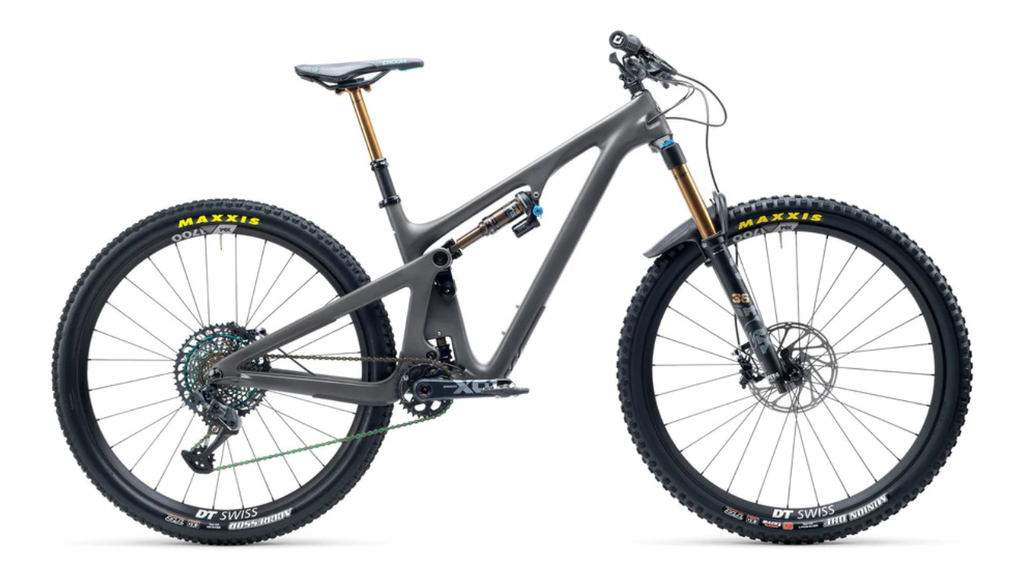 The 2021 Yeti SB 130 TLR T2 is designed to excel on the biggest of terrain - no trail is too much. This bike goes up and down with grace and ease so push your limits and go further and farther!

THE LUNCH RIDE KIT
Front Fork Travel: 10 more millimeters of fork travel
It never hurts to go bigger on your gear when you’re going bigger out there. Lunch Ride kits get a 160mm Grip 2 damper fork so riders can dial in their suspension and get the most performance out of their suspension and most of the terrain.
Rear Wheel Travel: 7 more millimeters of rear travel
7mm might be small to others, but to mountain bikers it’s the difference in “will you?” and “hell yes!” Pair this 7mm to the bigger front fork and the already capable SB130 starts to give its bigger sibling a run for the money. 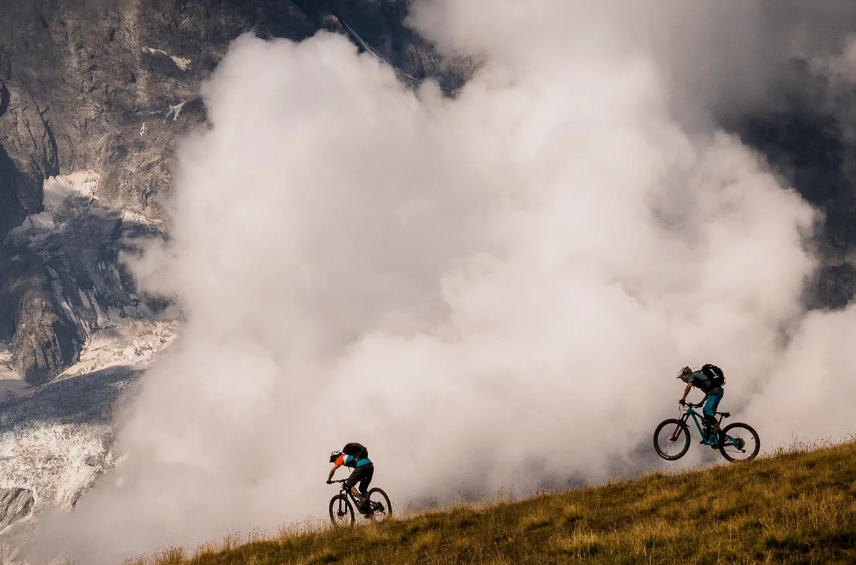 Slacker HTA: 0.5 Slacker headtube for bigger terrain
Lengthen the fork and you slacken the head angle by half a degree. What you get is a bike that exudes confidence no matter what you choose to descend so you can push longer, faster, and further into the unknown.
8 Component Spec Changes: We wanted to enhance the whole package
Wider bars, bigger rear rotor, beefier tires, burlier wheels, and more powerful brakes. LR isn’t just a spec change. It’s a mindset shifter. Eight total spec differences make sure the Lunchride is ready for anything the trail throws at it. It’s up to any task. Are you?
AXS: Rear derailleur upgraded to SRAM XXL Eagle AXS. Shifter upgraded to SRAM Eagle AXS Controller.

AXS is SRAM's new wireless, electronic integration platform that connects electronic bicycle components and software - completely changing your relationship with your bike.
Front End Doesn't Wander Climbing: And stays composed when pointed downhill – the rider position remains neutral.
Low Slung. Long Drop: Long stroke dropper post capability throughout entire size range — for greater agility.
A Shock Tune Unique to the SB130: Through a process of gathering qualitative data about "feel" from Yeti athletes and validation through quantitative telemetry data, Yeti is able to push the performance of the SB130. They developed the tune to enhance its mid-stoke and bottom-out control while maintaining ascending efficiency. While the tune is exclusive, the Fox shock it's build from is not, making replacement parts readily available, or further personalization accessible.
Leverage Rate: The patented Switch Infinity has been laid out to have supple small bump compliance but ramp up quicker in the mid-stroke while still allowing for bottom-out control with a 12% progressive leverage ratio.
Feel: Big mountain feel, capable, lively, with a centered rider position.
Balance Achieved: Refined for the unknown and everything in between the SB130's Switch Infinity provides more progressive ride without effecting the anti-squat properties.
Anti-Squat: Across the Yeti line, they have chosen a relatively flat and high anti-squat curve in the beginning and mid-section of travel where pedaling commonly occurs, aka the pedaling zone. This creates an efficient pedaling platform through your entire pedaling zone, there is an inflection point where the Switch Infinity link moves down, dropping the anti-squat drastically. Riders are typically not pedaling in this zone, so chain forces have less of an effect on the suspension performance. Decoupling of the chain forces allows the suspension to work more efficiently to absorb impacts making the feel of a Yeti distinct.
Silence is TURQ: Internally routed cable tubes from end to end for silent function. And less translation of housing during suspension movement. 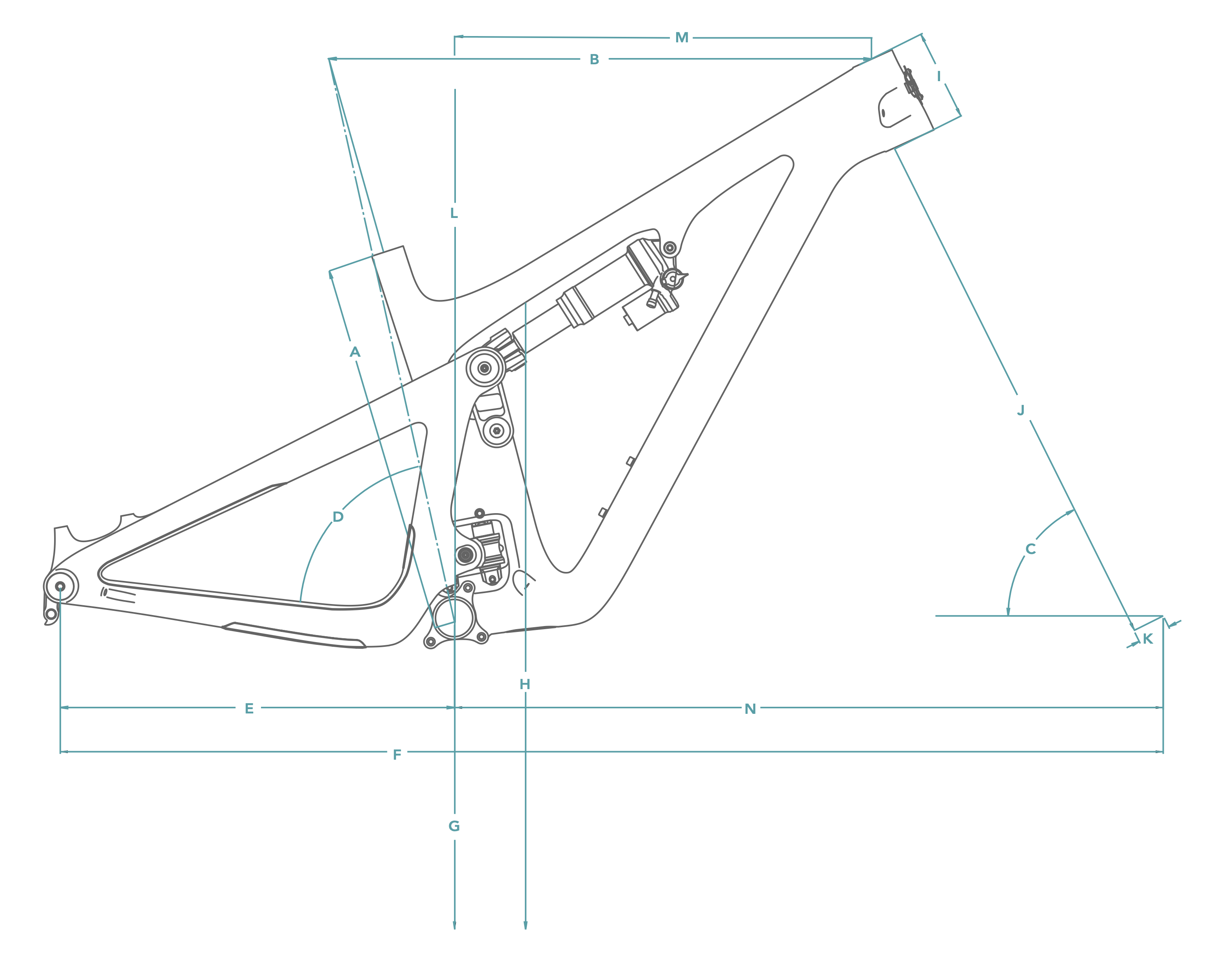 We recommend that you call our shop to discuss bike sizing and styles with the bike geeks at the shop. We have more to choose from than our website shows, and our bikes are available for purchase in our retail store. For the most accurate inventory and best advice, call 530-582-0909. We are open 8AM-6PM daily!

**IN STORE PICKUP ONLY**

Due to our dealer agreements, this item is not permitted to be shipped directly to you for orders placed online. However it can be purchased online and be picked up at our store in Truckee, CA. If there is no Yeti dealer in your area, give us a call. Our friends at Yeti want you riding their brand and we will help you get the bike you're looking for!

Back to home
Transition